With rents climbing, the premium for attended lobbies is shrinking 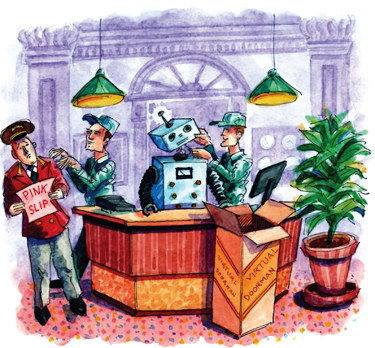 “More people [are] coming from creative industries… For them, full service is less important.”In Manhattan, a doorman is a marker of luxury and status.

But as rents rise in a tough economy, tenants are increasingly willing to go without that friendly face to screen visitors and accept packages if it means staying in New York’s most exclusive borough, industry experts said.

Data shows that the premium that renters are willing to pay for doormen has shrunk dramatically in the past two years. Between 2010 and mid-year 2011, the premium for rental apartments in buildings with attended lobbies dropped 36 percent for studios, 21 percent for one-bedrooms and 18 percent for two-bedrooms, according to a market report compiled by real estate consulting firm and brokerage Nancy Packes Inc., in collaboration with StreetEasy. In 2010, for example, the average monthly rent for a studio apartment in a non-doorman building was $1,774; by mid-2011, that figure had shot up 23 percent to $2,188. In the same time period, the average rent for a studio in an attended building increased just 9 percent, from $2,416 to $2,635.

Packes attributed this change to the current combination of sky-high rents and continued economic uncertainty. That climate has prompted Manhattanites to give up doormen rather than decamping for a less expensive borough, Packes told The Real Deal.

“On one level, it’s simple economics,” she said. “Steep increases in rent in the last two years hurt the people who want to remain in Manhattan.”

But there are also demographic changes afoot, which speak to long-term changes in New Yorkers’ housing preferences.

“There’s been a real shift in the nature of work forces, with many more people coming from creative industries,” Packes said. “They lead a less formal lifestyle, and for them, full service is less important. They’re looking for older buildings that are more in keeping with their personalities.”

While the sales market has suffered during the economic downturn of the past few years, rentals are undergoing a recovery. According to a five-year market report released last month by the brokerage Citi Habitats, the average monthly rent for Manhattan below 96th Street was $3,694 in June, up 8.7 percent from $3,399 in the same month of 2009 and nearing 2007’s average of $3,724.

One reason for this growth is “an increased interest in rental property from those taking a ‘wait and see’ approach to the unstable sales market,” said Citi Habitats president Gary Malin. He noted that the high-end rental market is doing particularly well, in part because buyers who would normally make luxury apartment purchases are opting to rent.

But while rents may be nearing their pre-recession highs, salaries for many New Yorkers are not.

“Renters are unhappy because raises and bonuses are still at recession levels, yet rental prices have increased significantly over the past three years,” said Robert Varvara, a real estate agent at Miron Properties.

That means some home-seekers are feeling budget pressure, and in response, they’re compromising on amenities, brokers said. That’s especially true if they want to stay in Manhattan rather than moving to Brooklyn or Queens.

In this kind of calculus, a full-time doorman is one of the first amenities to go, since renters get more space for their money in unattended buildings, said GieFaan Kim, an associate broker at Keller Williams NYC.

In non-doorman buildings, “the prices are better, and these days, prices are a big issue,” Kim said. “[Renters] say, ‘I could do without a doorman [or] a gym, as long as the numbers make sense.'”

Michael Chadwick, an agent at brokerage Bond New York, said he’s also noticed that “many young professionals have been moving out of luxury buildings and going for renovated, prewar apartments.”

This effect is heightened, he said, because many large luxury buildings have now stopped offering the generous concessions they gave tenants during the worst of the downturn. For example, several of his 20-something friends have just moved out of a Far West Side luxury building.

“They are all moving out because their rents have increased over 13 percent,” he said.

And while a doorman was once viewed as a necessity from a safety standpoint, the city has largely seen a continuous trend of decreasing crime since 1991, and neighborhoods that were once considered dangerous, like the Upper West Side, are now prime residential areas.

“The city is becoming much safer,” Packes said, noting that many New Yorkers now see doormen as a luxury rather than a necessity.

A “virtual” doorman “can do everything a real doorman can do, except literally open the door for you, and it cuts costs,” Kim said.

But the waning demand for doormen is also a reflection of changing Manhattan demographics, Packes said. These days, brokers are working with more people in technology and creative industries, such as marketing and design; in the past, the majority of their rental clients were in finance and law. In 2005, there were eight Manhattan renters working in finance for every one in technology, according to Packes’ report; today that ratio is only four to one. Her data also shows that 17 percent of Manhattan renters are now in the creative sector, up from 8.57 percent in 2005.

Salaries in creative fields tend to be lower, so these workers are less likely to splurge on a doorman building.

“The employment growth that we’ve seen tends to be on the lower to middle end in terms of earnings,” said Jonathan Miller, the CEO of Miller Samuel Real Estate Appraisers. “We’re seeing more demand for lower-priced renting.”

But it’s also a matter of preference. Renters who work in “creative” fields seem to place less emphasis on doormen, brokers said, and some even view attended lobbies as passé.

“I deal with a lot of people from creative industries,” said Miron Properties director of leasing Gary Posylkin. These renters often avoid “cookie-cutter” apartment buildings, he said, and instead want “more character in the building, something unique with exposed brick … something that doesn’t have that typical doorman feel.”

This preference doesn’t appear to be universal, however. Packes’ data shows that for rental apartments with four or more bedrooms — i.e., the high end of the market — the premium for attended-lobby buildings has actually increased by 34 percent. Packes attributed this to the fact that many high-end buyers accustomed to doorman service are currently renting rather than buying.

But it also indicates that the convenience of a real-life doorman will always be attractive to a certain segment of the population, said Miller, who predicted that once the economy recovers, the price premium for amenity-laden properties will rise again.

“It’s not that doorman buildings are losing favor, it’s that non-doormen are overpowering doormen in terms of pricing,” he said.