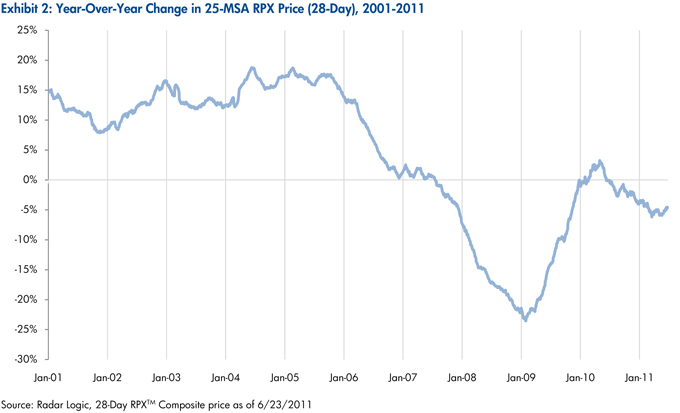 Nationwide housing prices and sales volume were on the decline in the first half of 2011, and appear likely to sink to new lows, according to the RPX Composite monthly housing report released today by Radar Logic.
Prices for homes sold nationwide in June, according to the 25-city RPX Composite, declined 4.7 percent from June 2010, while the transaction count in June fell 6.6 percent from the same month a year ago, and jumped just 0.9 percent from May 2011. Housing prices did rise 1.7 percent on a month-over-month basis, but June is typically the peak of the annual market, and the number does not take seasonality into account. If the price declines in the fall of 2011 are similar to those of the same period a year before, the composite could reach a new low by next January, according to Quinn Eddins, director of research at Radar Logic. — Adam Fusfeld