Excessive pay to get brokers in the door?

Accusations of firms paying ‘above market’ to poach brokers swirl, leading at least one company to offer ‘retention bonuses’ to agents 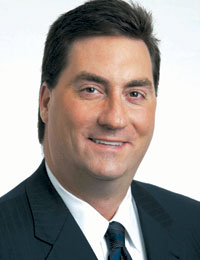 Mark Rose, CEO of Avison YoungReal estate executives are quietly fuming over what they say are aggressive bonuses that several new and expanding commercial firms are paying to poach brokers.

The past two months have been a particularly active time for brokers shifting alliances, partly because some firms have stumbled in the weak economy and make for soft targets, and partly because brokerages with a national presence are expanding into the New York market, which remains one of the strongest in the nation. In the last few months, the firms Avison Young, Stan Johnson, Lee & Associates and Brookfield Financial have all made plays to open or expand in New York.

As an example of the rich compensation being offered to switch firms, several top executives said that Colliers International — which has been on a hiring binge in the city over the last year, and has picked off at least a half-dozen agents from companies like CB Richard Ellis and NAI Global — has offered twice the typical bonus package to lure agents.

“[The firm] is overproviding for these individuals, who are not top producers,” said a high-level source at a competing firm.

Similar complaints were made about Avison Young. Another executive told The Real Deal: “You don’t think Avison Young had a recruitment firm canvasing my brokers? And offering them ridiculous sums of money to leave?”

Meanwhile, at least one firm, Newmark Knight Frank, which was acquired last month by financial brokerage BGC Partners, is giving many of its employees a cash payment that some describe as a “retention bonus” for those who stay on board.

However, the number of brokers moving around is showing no signs of slowing.

Michael T. Cohen, president of the Tri-State region for Colliers, denied that the firm was paying above-market rates for new agents, but said he expected more brokers to switch firms.

“When the market slows down, brokers are looking for ways to punch up their earnings and reconsidering whether they have the right platform,” Cohen said. “I think you’ll see some shifting around over the next year.”

Last month, Studley announced that it had hired away the president of the Tri-State region’s retail division at the weakened Grubb & Ellis to lead Studley’s first retail team in this area.

Also, in September, Brookfield Financial lured two longtime brokers from Eastern Consolidated to open an investment sales business here. Meanwhile, two companies firmly established outside of New York, Toronto-based Avison Young and Stan Johnson, an investment sales firm based in Oklahoma, announced in late September that they had made their first local hires in New York. And this month, local brokerage and management firm Sierra Realty will join the California-based national network Lee & Associates — and will operate under the name Lee & Associates NYC. The firm expects to announce the hiring of two experienced brokers from a competing firm soon.

While all firms provide some form of financial incentive package to lure talent, there is no set industry amount.

However, insiders say there is a rough guideline that a firm will pay successful brokers a onetime bonus equal to their average annual earnings over the past three to five years. Superstar brokers, meanwhile, can get up to four times that.

In a standard incentive deal, a broker who earned $500,000 in gross commissions annually over several years and took home $250,000 would be offered a cash incentive of $250,000 to join a firm. But sources said some of the firms that are hiring now are offering bonuses that are twice that — or $500,000 to those who generate $500,000 in gross commissions — to mid-level (rather than superstar) brokers.

Other incentives that companies are using to lure brokers include higher commission splits (either for a limited time or permanently), agreements to pick up additional expenses for brokers, and offers to pay for stock from their old companies that will be lost because of the move.

Newmark is one firm paying brokers who stay put.

The company, among the top three or four in the city, has not seen an exodus of agents. Sources say there were bitter complaints recently about a proposed new broker contract whereby the firm would pay brokers some of their commissions in company stock. However, they noted, company CEO Barry Gosin agreed to keep paying brokers the traditional way — although payments in stock will remain in some fashion.

“They saw a contract and got pissed off,” one Newmark insider said. “It is being modified.”

While the deal for Newmark’s principals to sell the company to BGC for $63 million in cash plus stock was finalized in the middle of last month, each agent now has to negotiate a contract with the new owner. The firm’s 14 major producers — whom the insider said control 75 percent to 80 percent of the business — are locked in for about five years.

While some industry sources said Newmark is offering “retention bonuses” of about 10 percent of a year’s income to brokers, that characterization was disputed by others.

The company source said that Newmark principals are, in fact, giving an undisclosed amount of money not as a retention bonus but as a “show of appreciation” to the majority of employees, both commissioned and salaried, who remained at the firm.

No firm wants to be seen as overpaying for brokers, and the mere suggestion that a firm is paying “above market” can cause executives to wince.

That’s because firms don’t want to be seen as being profligate with money or desperate to bring on successful agents. The money, the firms say, is spent with the expectation that the firm will recoup its investment in two or three years.

Cohen said Colliers’ incentives were in line with the industry. But (like the rest of the more than a dozen sources The Real Deal spoke with for this story) he declined to provide specific numbers about his own firm.

“The formula that we and others use is, what is the individual or team average production over three to five years, and then we focus on the house share of that,” Cohen said. He added that it is “not uncommon, in a multiyear agreement, for the incentives to be given out over a period of years and tied to production.”

Colliers made some cost-cutting moves over the summer, and cut back salaried staff in property accounting and corporate accounting. Sources said the local office is looking to hire a sales manager, leading to rumors, which Cohen denied, about a high-level shake-up there. The local office is led by Cohen, CEO Mark Jaccom and COO Joseph Caridi.

While Colliers has a long presence in the region through the old firm Williams Real Estate, Avison Young is trying to gain a beachhead by hiring experienced agents from other firms.

In September, Avison Young — which has opened 10 offices in the United States since 2009 — hired leasing broker Gregory Kraut, a former first vice president at CBRE, as a principal.

An executive at another New York brokerage firm said Avison Young was “talking to people in every discipline — sales, retail, office,” and offering incentives, “probably like a year’s worth of production.”

While Avison Young declined to comment for this article, company CEO Mark Rose was quoted in a Canadian publication last month saying that part of a new $40 million investment by Canadian private equity firm Tricor Pacific Capital would be used to grow its New York office.

Rose — who was at the helm of Grubb & Ellis when it merged with NNN Realty Advisors in 2007 — is spearheading the U.S. expansion.

However, several longtime Manhattan brokers said it would be tough for Avison Young to break into this market by hiring brokers a few at a time.

“If you think you can build a company and culture and business based on buying talent, it is a ludicrous concept, and you will fail,” is how Newmark’s Gosin bluntly put it.

James Wacht, principal of the New York office of Lee & Associates, would not comment on what financial incentives were being offered, but said senior brokers would be allowed to invest as shareholders in the New York office and subsequent offices that open.

The New York City office of NAI Global may be in a better position to hire talent next year. It lost a few agents a year ago to Colliers, and more recently a pair to Murray Hill Properties, and has been in limbo for months as it negotiates to sell to investor Andrew Farkas and his C-III Capital Partners (see “Andrew Farkas: The Sequel”). That deal, announced in June, was expected to close in the third quarter, but did not.

Insiders said a separate Farkas deal with ailing Grubb & Ellis may be delaying the NAI purchase.

One insider said NAI’s New York office had fallen behind in paying draws, the money advanced to relatively junior agents to keep them afloat.

Jeffrey Finn, president and CEO of NAI Global, told The Real Deal there was no financial issue with draws.

“Our position on draws is they are meant for an interim period, and we continue to use draws as a method to help people transition and stabilize in the industry,” he said.

A source at NAI said the company would be more aggressive about recruiting — utilizing incentives such as preferred splits — once a sale to Farkas was finalized, now expected by the end of the year.