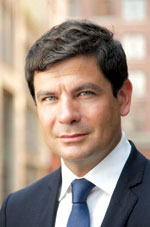 The firm has struck a deal to broadcast its own internally produced 12-minute show on Cablevision’s Plum TV every Saturday, twice in the morning and once in the evening. Called “Blend”for its mix of real estate, lifestyle and celebrities, the show is hosted by Nest Seekers senior vice president Caroline Grane and filmed inside some of the firm’s priciest listings.

The first episode aired Memorial Day weekend. It featured a cooking segment, a roundtable discussion by artists and designers about Manhattan’s Sloane mansion, and a tour of the Watermill home of Todd Hase, a Soho-based furniture designer. The house is currently listed with Nest Seekers’ Joseph DeCristofaro for $3.295 million.

Grane is one of four New York cast members on “Million Dollar Listing,”and Nest Seekers’ involvement inspired the firm to start producing its own show, said Ravi Gulivindala, a Nest Seekers managing director who is in charge of “Blend.”

But while the Bravo show aims to entertain viewers with the dramatic lives of real estate brokers, “Blend”is intended to generate exposure for sellers’ homes.

“It’s all part of our client-centered mission,”said Gulivindala. “It’s offering another platform for our sellers. When we tell them we want to film [their properties], they love the idea.”

Agents, too, want the opportunity to show off their listings on TV.

“I learned a lot at Keller Williams — they do a great job of coaching and training,”said Roumila, who brought his team of two agents with him to Nest Seekers. But he believes appearing on “Blend”will help build his brand. “The TV and marketing presence at Nest Seekers will improve my reach,”he said.

Roumila’s $4.65 million listing at 439 West 21st Street has already been filmed for an episode of “Blend,”he said.

One drawback to Plum TV is that it does not air in Manhattan, but only in high-end vacation destinations such as the Hamptons, Aspen and Miami Beach. The cable operator estimates the station gets about 500,000 to 1 million viewers at any given moment.

Nest Seekers has expanded its East End presence of late, acquiring two firms in the region since April. And Gulivindala said he believes Plum TV viewers have an inherent interest in Manhattan real estate.

“When we market a property, we don’t just do it locally, we take it around the globe,”he said. “Anybody who is watching could be a client, a referral source, or some other advantage for our business.”