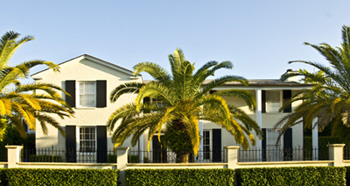 The foreclosure wave has broken on every Florida shore, even the pricey ones of Palm Beach.

It’s been a tough year at the top end of the market, even if foreclosure rates are a fraction of those found at less affluent price ranges, and make a smaller contribution to the state’s unwelcome designation as the fourth worst housing market in the country, according to RealtyTrac.

Through early October, foreclosures have been filed on 13 single-family homes in Palm Beach, according to Christine Franks, Palm Beach real estate broker and owner of Wilshire International Realty, who tracks sales data for clients and to keep on top of the market. Five of them have sold, all of them fetching at least $1 million. It’s not a typical time, she said, with a slow sales season underlying the extraordinary financial distress some Palm Beachers are suffering, however discreetly.

The five properties sold include houses on North Ocean Way, La Puerta Way, Country Club Road and Via Las Incas. A Pendleton Avenue mansion was sold at auction after owner Thanos Papalexis, a British real estate tycoon, was sentenced to life in jail in September by a British court for the murder of Charalambos Christodoulides, a tenant involved in a business dispute with him. All five properties each eventually changed hands for between $1.1 million and $4.6 million.

In addition, home sales generally got off to a slow start in Palm Beach, where large all-cash deals are the norm. The first quarter saw only five sales.

“Sales normally take place in the season, with some that go under contract at that time, closing in May, June or July,” Franks said. “But, this year, that didn’t happen. People weren’t even looking.”

The winter months are considered the height of Palm Beach’s season, when out-of-state “snowbirds” return to their Florida homes. Not this year, where the end of the boom continued to distort the market.

In the first part of 2009, “people were experiencing financial fears,” Franks said. “Financial institutions and insurance companies had problems and the government had to inject funds to keep them afloat. The stock market had a downturn and people lost money in 401Ks and IRAs. The auto industries had bankruptcy problems — some closed and for some, the stocks were worthless — and the government had to intervene with funds.

“The fears were based on what they had lost and they were afraid of what else was going to happen,” Franks said.

In the first quarter of 2009, 12 homes went under contract and five sales closed. By the end of the third quarter, according to Franks, there were a total of 48 single-family homes sold. Between 2002 and 2004, before the boom, the market averaged 459 single-family homes for sale, with 142 deals closing.

In the first half of 2009, four single-family homes sold for less than the prior sales price. Franks also saw more financing and fewer cash deals.

The majority of this year’s sellers, excluding those in foreclosures, were not in trouble, Franks said.

“Some people’s portfolios may have been hit. Others might be selling their second or third home,” she said. “Some just wanted to move, from the Intracoastal Waterway to the ocean, for example, or downsize or upsize.”

But he said he does not foresee an onslaught of foreclosures.

“Because of the net-worth factor, no matter how bad the economy gets, in Palm Beach we won’t see an avalanche of foreclosures,” he said. “If sellers can’t get the price they want now, they will wait a couple of years.”

He attributes the year’s slow start to trepidation about the economy.

“People were reluctant to spend, but I think we are going to have a lot healthier season coming up.”