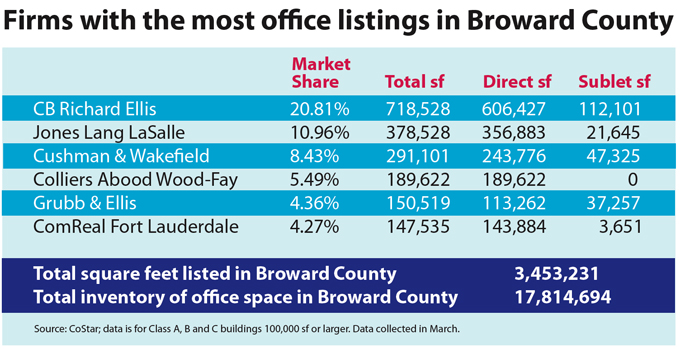 Just as in Miami-Dade and Palm Beach County, CB Richard Ellis leads Broward County in office market share, listing nearly 21 percent of the county’s office space in Class A, B, and C buildings of 100,000 square feet or larger, through the end of the first quarter of 2010.

According to a report by CoStar commissioned by The Real Deal, Jones Lang LaSalle comes in second, with just under 11 percent of the market. Third is Cushman & Wakefield with 8.43 percent. The top six companies in Broward County currently list almost 1.9 million square feet in these buildings, which is about 10 percent of the total space in Broward County — about 17,814,694 square feet.

Population growth in South Florida has fallen in the last several years, and domestic outmigration has increased. Broward County’s office market, which has been heavily dependent on service-oriented jobs, has been hurt accordingly.

The Fort Lauderdale office market was hit hard by an uptick in outmigration from South Florida, as the area’s growth was driven by service jobs, according to Elizabeth Berthelette, an economist at Property and Portfolio Research, a CoStar affiliate based in Boston and London.

“In Fort Lauderdale, you tend to find a lot of service-oriented office jobs, insurance, accounting, legal services, jobs that are related to the population growth there.Given that we started to see outmigration in South Florida, we’ve seen a lot of these services shops go away, with real estate, insurance, and thus created vacant office space,” she said.

Tenant movement in the county has been centered in the Fort Lauderdale office market.

“In Fort Lauderdale, downtown has been an issue,” Berthelette said. “There have been some tenants playing musical chairs. In West Broward, that’s where a lot of the back office shops were, and real estate jobs, and those tended to get cut first, so you definitely saw some distress there earlier on in the cycle.”