FHA backing becomes silver bullet for some condos, headache for others

Some see Federal Housing Administration condominium re-certification as a great tool to move units in a stagnant market. Others complain about opaque and arbitrary rules governing decisions as to which projects get recertified.

The only certainty: Out of the thousands of eligible condo projects across the country, few have even applied to be recertified. (See chart for the largest condo projects in South Florida, with a pending deadline, below.)

For those condo projects that do get certification, it opens up a new market segment for them to sell units. That’s because most conventional mortgages and cash buyers are still hard to come by.

“It really is one of the only games in town when it comes to mortgages,” said Lisa Magill, a real estate attorney and partner at Becker & Poliakoff in Fort Lauderdale.

Still, condo boards are not rushing to get the agency’s blessing.

In January and February, the FHA approved 286 projects and rejected 89 re-certifications across the country. That includes only four in all of Florida, according to FHA officials. During that timeframe, the Paloma Lakes Condo in Coconut Creek is the only project in South Florida to receive its recertification.

In Florida last year, the agency recertified six projects, and turned down four others.

There are about 675 condo projects in South Florida that are facing deadlines to get recertified, according to FHA data.

The Federal Housing Administration’s re-certification basically insures lenders against default. More than 25,000 condo projects missed a December deadline to get approval for using FHA-insured mortgages. So FHA instituted a new series of rolling deadlines. But that doesn’t seem to have spurred much recertification activity.

Even with the current problems, FHA says the recertification program helps make sure it’s backing buyers in financially stable condos, and not throwing money at troubled projects. For those condos that do get the recertification, they can sell units to the 30 percent of buyers who are seeking FHA-backed loans.

“I do think there’s a lot of opportunity for these condo boards,” said Vicki Bott, a deputy assistant secretary in the Federal Housing Administration.

For South Florida projects, it could be a missed opportunity.

“It really could be a silver bullet,” said Peter Zalewski, referring to the over-built South Florida condo market.

FHA requires 3.5 percent down as opposed to the 20 percent that lenders are asking for conventional mortgages these days, Zalewski said. So that opens the market up to buyers who may not qualify for conventional mortgages. That, in turn, gives the developers the ability to raise prices and for more qualified buyers to afford the financing, he said.

Many bulk buyers took advantage of a new Florida law last year that limits the liability they inherit from the original developers to buy thousands of units. They need to reach a certain price point to sell, making FHA backing critical, Zalewski said. Bulk buyers tend to be institutional, so their decisions are driven more by price point, he said.

In some areas, like New York, few have moved to get FHA approval because the high-priced Manhattan condo market doesn’t lend itself to such a program, said Craig Price, a real estate attorney and partner at Belkin Burden Wenig & Goldman, LLP in Manhattan. It may only make sense for stalled condo projects in an outer borough, he said.

Even so, it’s a lot of money, time and paperwork. Price said he closed an FHA-backed deal recently in New York which saw a five-month approval process, and that was for a single-family home.

The frustrations have grown enough that the Community Associations Institute, which represents thousands of condo associations across the country, recently fired off a letter to FHA officials complaining about the criteria and process the agency was using in making its decisions.

“CAI’s membership is making every reasonable effort to comply with FHA condominium insurance program requirements, with many condominiums spending as much as $6,000 to submit their condominium for certification or recertification ….,” wrote Thomas Skiba, CAI’s CEO. “For this process to work smoothly for both condominium associations and FHA, the rules governing the program should be clear and consistent as well as transparently and evenly applied by the homeownership centers. Regrettably, this has no always been the case…”

FHA is all over the map with the rules on what percentage of a condo can be rentals, said Andrews Fortin, vice president of government and public affairs for the Washington DC-based CAI. Some criteria don’t even reflect the fiscal health of the condo, and the agency hasn’t made it clear what the rules are, he said.

FHA officials said that they’re working on addressing some of the issues raised by CAI. The program has only been around for about a year, and they’re planning on issuing new guidance on the program in June, they said. 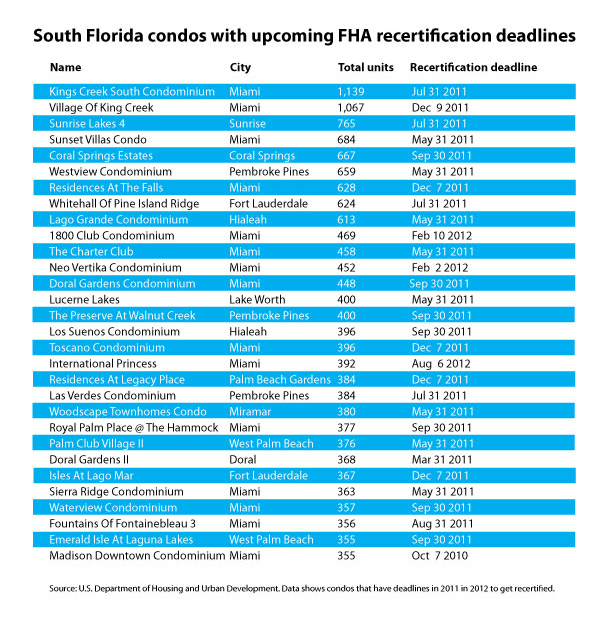