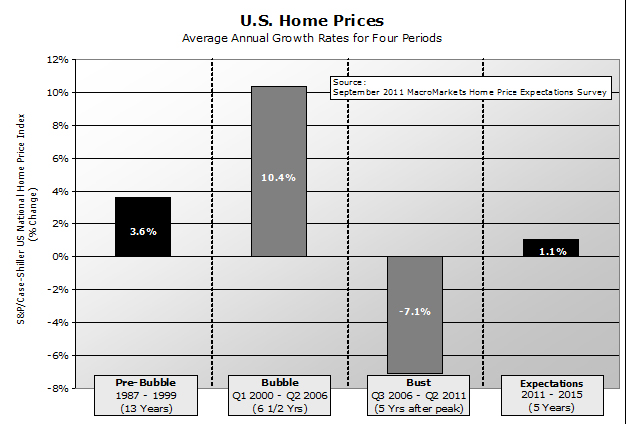 More than 100 economists, real estate experts and investment strategists projected the path of the S&P/Case-Shiller U.S. National Home Price Index over the next five years. And the forecast isn’t pretty.

According to the MacroMarkets survey released today, experts predict home prices will gain just 1.1 percent annually over the next five years.

“Expectations for home price performance in 2011 has become somewhat less negative,” said Robert Shiller, one of the creators of the Case-Shiller index and a co-founder of MacroMarkets. “Unfortunately, the average projection is somewhat more negative for each of the following four years.”

The glacial-paced growth is even more disappointing considering the record low mortgage rates, experts said. And no matter how much effort the government puts into correcting a problem, most of the experts said a solution should come from the market.