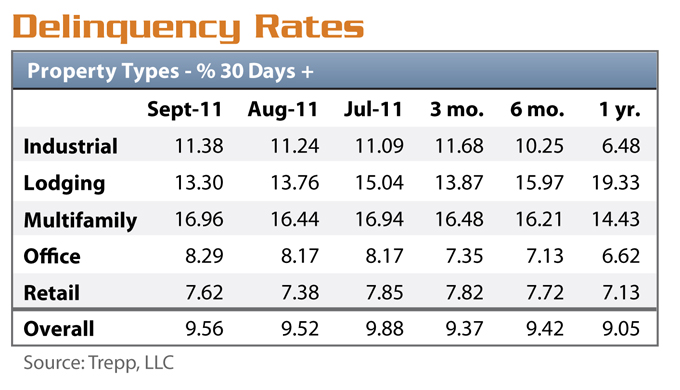 The number of commercial mortgage-backed securities delinquencies evened out in September nationwide, following a jump in July and a slide in August, data from market research firm Trepp, released today, shows. The delinquency rate for U.S. commercial real estate loans in CMBS inched up 4 basis points to 9.56 percent.

The delinquency rates for all major property types were up slightly, except for hotels, Trepp says.

The hotel rate was down 46 basis points, but this was mostly driven by the resolution of loans at the national hotel group Red Roof Inn, Trepp data shows. The Red Rood Inn loans were resolved with 50 percent losses, which resulted in the removal of two distressed hotel loans, ultimately reducing the delinquency rate for hotels, but not in the way that investors would have liked.