The U.S. real estate that doomed the economy 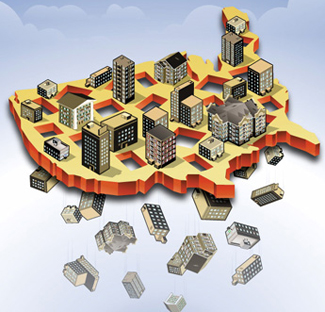 Most people have come to understand that real estate hastened the recession, but according to the Atlantic, few have identified exactly what kind of real estate sent the economy spiraling downward.

Enter Christopher Leinberger. The University of Michigan professor has singled out the 19 standard types of real estate that proliferated across post-war America, became standardized, easily financed and, eventually, over-saturated. They are largely hallmarks of suburban America, including the detached starter home, the multi-tenant bulk warehouses and self-storage facilities.

Perhaps, chief among them is the so-called “grocery anchored neighborhood center” — the 50,000-square-foot shopping plazas with a large supermarket and a handful of national and regional chains and drive-throughs, along with a few hundred parking spaces.

America, according to Leinberger, is undergoing a fundamental shift away from suburbia. Consider that construction in Washington D.C., which was the area perhaps least affected by the downturn, has centered on walkable, high density living. More cities, Leinberger believes, must follow suit.