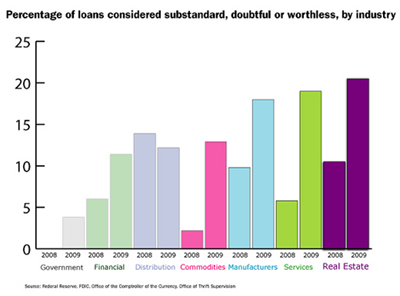 A national review of all categories of large loans in the United States found that 20 percent of those secured by real estate are in distress, the highest percentage among the seven categories surveyed, government statistics released yesterday show.

Within the $241 billion of real estate loans, one-fifth, or $49 billion, was considered very weak, doubtful or a total loss, double the level of $25 billion reported last year, the survey found.

The real estate sector held the highest percentage of loans considered substandard or worse, and was followed by services with 19 percent and manufacturing with 18 percent. The overall average was 15.5 percent.

The annual survey called the Shared National Credit Review is taken each year by the Federal Reserve, the Federal Deposit Insurance Corporation and other federal agencies, and reviews loans greater than $20 million held by U.S. banks, foreign banks and non-banks such as hedge funds, securitized loan pools, insurance companies and pension funds.

The government reviewed a sample of $1.2 trillion of the $2.9 trillion in loans held by the financial entities.

Many hedge funds and private equity lenders are trying to sell loans or suing to foreclose on others on a number of properties in New York. Five Mile Capital is fighting in court over a $79 million mezzanine loan on the former New York Times Building and SL Green Realty affiliate Green Loan Services sued this month to preserve the value of its $30 million mezzanine loan at 620 Sixth Avenue in Chelsea.