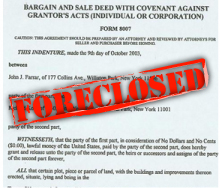 Nationwide foreclosure activity may be en route to a slowdown, according to RealtyTrac’s April foreclosure market report, but it’s going to be a rough road getting there (see full report below).

The number of default notices filed throughout the country decreased 12 percent over the previous month and 27 percent compared to April 2009, the report, released today, shows.

But the residual effects from the foreclosure crisis last year are still being felt with the number of bank repossessions jumping 45 percent from April 2009, according to the report. This rate of repossessions was the highest monthly showing that RealtyTrac has recorded since the company started tracking data in January 2005, by sheer number.

Daren Blomquist, a spokesperson for RealtyTrac, said that the prognosis is not completely linear.

“This decline in new filings, in my mind, is a pretty big sign post that we’re headed in the right direction,” Blomquist said. “[But] the record REOs are a warning that it’s going to be a rough road.”

Blomquist said that high unemployment and the number of underwater homeowners is having a negative influence on foreclosure activity. And, despite the decline in the rate of new foreclosure filings, a full recovery could take a while.

“Our best guess… is that it’s going to be 2012 or 2013 before we see any kind of market balance returned,” nationwide Blomquist said.

Although Florida’s foreclosure activity was down 18 percent between March and April and down 25 percent from April 2009, the state still ranked the second-highest in the nation for foreclosure activity, according to RealtyTrac. Statewide in April, 48,384 properties received a foreclosure filing.

But, despite this bleak data, Peter Zalewski, head of Condo Vultures, a real estate consulting firm, said he thinks South Florida is showing signs of stability.

“From all the lenders we’re talking to… we’re expecting the foreclosure rate to fall through the end of the year,” Zalewski said.

According to his firm’s data, the number of foreclosure filings in South Florida declined 21 percent in the first quarter of 2010, compared to the same quarter a year earlier.

Zalewski said he believes the decline in the rate of foreclosure in South Florida is due to lenders’ increasing interest in the short sale option.

Weighed against the cost and time it takes to complete a foreclosure, a lot of lenders are saying “let’s just go ahead and short sale it out,” Zalewski said.