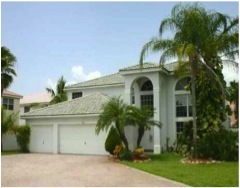 A short sale listed in Miramar

The Broward number represented a 41 percent increase over the same period in 2009.

Feinberg said the reason for the higher number of short sales in Broward could have been a greater willingness for banks to lend during the boom in the area.

“I think Broward was the hub of some unscrupulous lending,” he said.

“In these economic times, people don’t have the ability to close most properties, they look at short sales instead,” Feinberg said.

The Florida county with the most short sales in the first quarter was Orange County, which saw 2,459 from January to March.