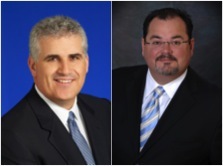 Flagler Real Estate Services, the brokerage and property management arm of Coral Gables-based Flagler, has added two veterans to its leasing and sales team — one from Colliers International and the other from Jones Lang LaSalle.

Wayne Schuchts is heading to the firm as a senior vice president from Colliers, which he joined in 2009. He previously worked at JLL.

“From a high level, I would tell you that Wayne Schuchts is probably one of the most successful brokers in South Florida, if not the state,” said Flagler Real Estate Services President Pike Rowley. “We felt it was quite a coup to have him come over.”

Schuchts has previously been named the South Florida Business Journal’s top broker of the year.

Lyden comes to Flagler as a vice president after serving as a senior vice president for JLL, in addition to several years at Trammell Crow Company and CB Richard Ellis.

Rowley said Lyden was looking for a new home after he and his partner at JLL had gone separate ways. Lyden has largely done work on the tenant representation side, and was looking to add more weight to the landlord side, which Rowley said is a need for the firm in Miami-Dade County.

Schuchts will be handling the firm’s leasing and sales activities at Centergate at Gratigny, a 1-million-square-foot mixed-use park in Hialeah, working alongside Lyden. He will also work on the Beacon Lakes Business Park in the Airport West submarket.

The company, which is owned by equity funds managed by affiliates of Fortress Investment Group, currently manages around 13 million square feet of Class A office space throughout Florida.

The firm recently closed a 62,507-square-foot lease at nearby Mellon Financial Center at 1111 Brickell Avenue.

Colliers, which was renamed from Colliers Abood Wood-Fay after an April merger, added Stephen Nostrand, a managing director at the firm at the end of last month. The firm recently completed the lease of a 30,527-square-foot mixed-use property at 200 Crandon Boulevard, Key Colony Plaza on Key Biscayne.