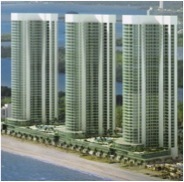 The new-construction condominium market in Sunny Isles Beach has been performing well in recent months, with unsold inventory on the decline, and that’s largely due to sales at the Trump Tower II condo, according to a new report from real estate brokerage and consultancy Condo Vultures. Of the 111 new condo sales during the second quarter in the oceanfront community, 57 occurred in Trump’s namesake 43-story tower. That’s up from 30 units sold in the building during the first quarter and just 11 units in the quarter before that. The uptick in sales, according to Condo Vultures principal Peter Zalewski, can be attributed to price cuts. The second-quarter units went at an average of $415 per square foot, down from $420 per square foot one quarter earlier and $510 per square foot in the fourth quarter of 2009. Tower II is one of three nearly-identical buildings with a total of 800 units facing the Atlantic Ocean. Just over half of those units are sold, and Tower III is completed but vacant. TRD